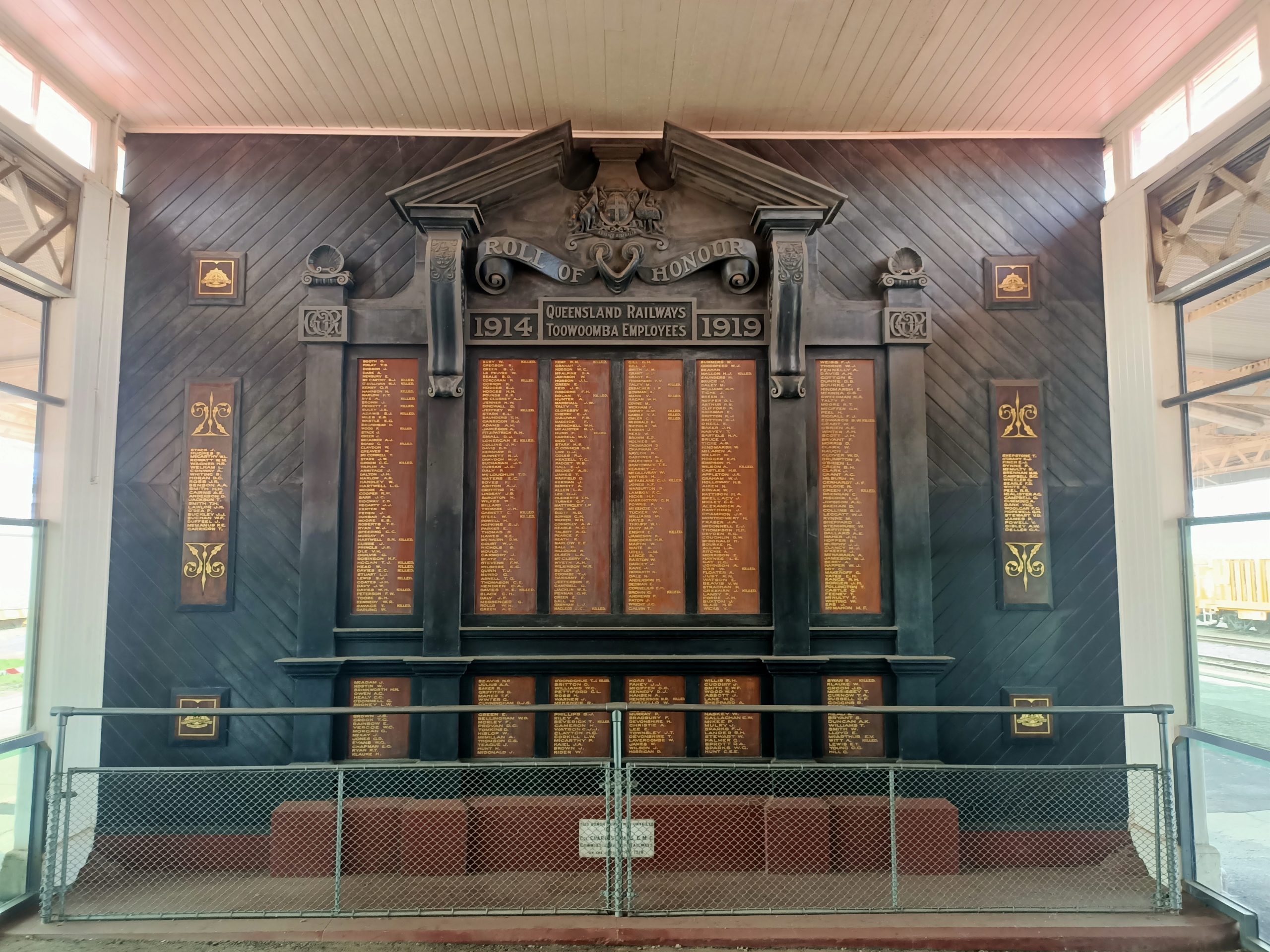 There were initially 209 names of railwaymen from Queensland’s Darling Downs region on this incredible honour board. Twenty-one of those never returned to their families.  The board was hung seven months before the war ended. As the war continued, more men were called up to serve and more names were added.

This memorial is heritage-listed and is recognised as one of Australia’s significant war memorials. The board was designed by a railway architect and built at the Ipswich railway workshops and unveiled in April 1918.

There’s something very unusual about this honour roll. Look at the original four panels. You’ll note the names are not in alphabetical order, unlike many rolls.

This is because the names are in order of date of enlistment. The names you see around the original panels were added after the roll was unveiled. The first man to enlist was Private W Bury. Sadly, he died of his wounds five months after leaving Brisbane. He was a boilermaker, married and 31 years old. Pte Bury was among 102 men named on the roll who never returned to their families.

A holidaying British researcher stumbled on this memorial in 2015. Paul Cobb’s curiosity got the better of him. He wondered what all these men did, so he researched the military history of every man on this roll! He found information on all but 18 of them.

So why are only railwaymen who served in World War I recognised?

Because workers were not allowed to enlist for World War II.

According to Paul Herbert, local historian and tour guide of local history tours, Toowoomba Trails, “so many people enlisted in World War I, that the railway couldn’t run.

“It’s highly technical to get a train up and down the range (to Toowoomba). It requires very skilled workers. They had enormous difficulty keeping the trains running to the most significant freight and passenger rail line in the state during World War I,” he said.

So in World War II, railway workers from the Darling Downs were forbidden from enlisting.

Three men tried to enlist in Sydney but, according to Paul, were “brought back in chains”.

“Toowoomba was integral to the war effort – materials for Australia and America’s war infrastructure transited through Toowoomba. Supplies and materials went to places like Charleville in western Qld and the road-building supplies to Darwin were all moved via Toowoomba’s railway network.

“No one who worked on the railway here in WWII enlisted,” said Paul.

The military histories of these men are confronting and sad, but a reminder of what a commitment to country meant during the war effort.

Percy Arthur was wounded in action FOUR times. Each time he was patched up and then sent back to fight. This is what Paul Cobb found when he researched Pte Arthur:

Private Percy Acrill Arthur of Maryborough enlisted 1 May 1915, aged 19. Occupation shown as a blacksmith. He was awarded the Military Medal (MM) for gallantry at Broodseinde Ridge in Belgium on 4th October 1917. He returned to Australia on 28th March 1919. He served at Gallipoli from September to December 1915 and then on to the Western Front where he was wounded FOUR times.

Interestingly, Pte Arthur’s younger brother George also enlisted, serving for just over two years. According to Paul Cobb’s research, “he returned to Australia in September 1918 following a somewhat chequered two years of service on the Western Front culminating in a self-inflicted wound to the foot which saw him court-martialled”.

The importance of memorials

The efforts of these railway workers are not forgotten because of memorials like honour boards. Their names are written in gold so we don’t forget them. Their story is important, and so is yours. Please consider telling your stories to your families and even writing them down. Your stories will offer future generations an insight into what life was like. My book, The Bottom Drawer Book, has room for you to write your responses to a series of questions and actions which will become a memento of you and what’s important in your life, written in your handwriting, your doodling, your humour, your ideas, and your life’s reflections.

You’ll find the Queensland Railways Toowoomba Employees Roll of Honour at the Toowoomba Railway Station on Railway St which is within walking distance from the city centre. The board now sits protected in a glass room that is rarely open to the public. You can see through the glass though. You can access the room via the Toowoomba Trails guided walking tours. And while you’re looking at the board, look outside to the left and see if you can spot the air-raid shelter, built as protection for railway employees. The location of the missing remains of hundreds Brisbane Mental Hospital patients has been identified. Former hospital worker Ferg Brindley, now 90, shared his memories with journalist and author Lisa Herbert.