All I want for Christmas is transparent funeral pricing: ACCC releases report into funeral sector 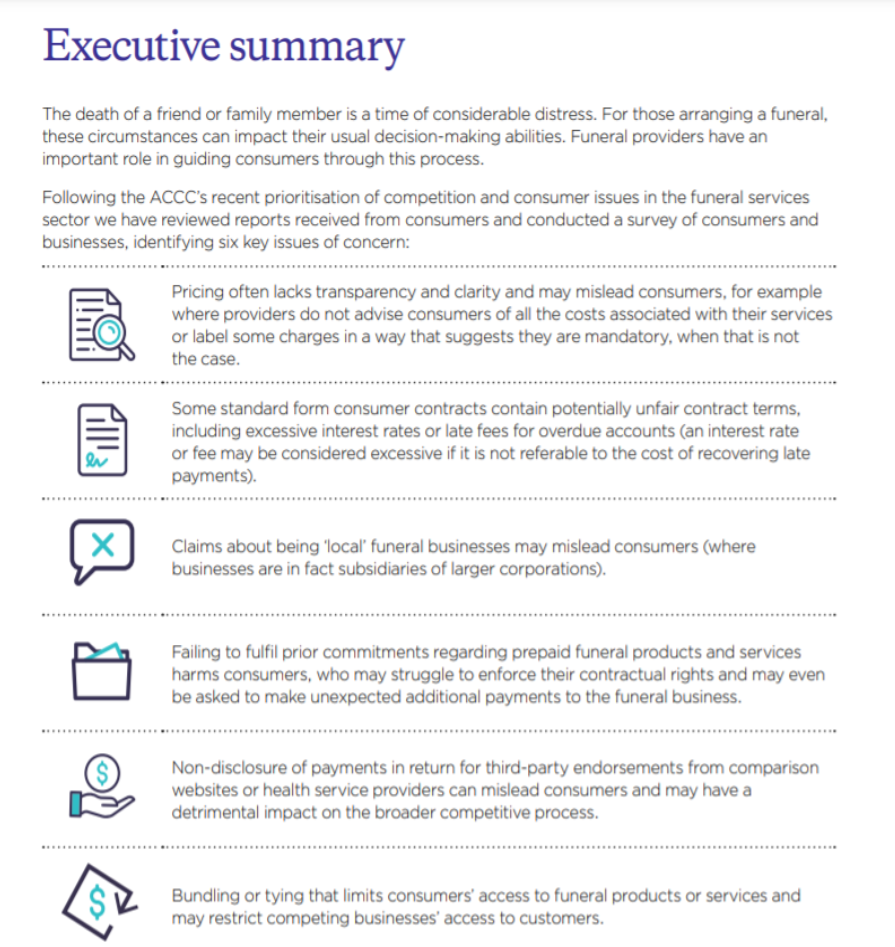 2021 was a big year for the Australian funeral industry and many of the developments didn’t get the attention they deserved.

Several funeral companies were fined for misleading behaviour and states held mirrors to their funeral regulation. The consumer watchdog also released a report into the funeral sector, identifying pricing and transparency issues. No real surprise there.

The Australian Competition and Consumer Commission (ACCC) made it clear back in February that it had the funeral sector in its sights, taking “targeted action against some funeral businesses following concerns about the use of market power and unconscionable conduct in the sector”. Before I explore what the states got up to, let’s see what penalties the ACCC dished out in 2021.

Just last week a northwest Tassie funeral company admitted to questionable behaviour. Parkside Funerals “made false and misleading representations in its invoices about the price of its funeral and cremation services, and acknowledged that it entered into contracts containing unfair contract terms”.

Among other things, Parkside Funerals had been including a $500 ‘Estate Fee’ in its invoices and told customers this fee was associated with the delivery of its funeral and cremation services. But the ‘Estate Fee’ was actually a late fee if the customer did not pay the invoice by the due date. (You can read the court-enforceable undertakings here.)

It was a similar story for Brisbane’s Alex Gow Funerals in September, paying a $13,200 penalty for ‘false and misleading representations’. They too included an ‘Estate Fee’ on their invoices. They’ve since changed that to a ‘Late Payment Fee’.

Last month Bare Cremation was slugged a $13,320 penalty after the ACCC issued it with an infringement notice for allegedly “making a false and misleading representation about the price of its cremation services”.

ACCC Deputy Chair Delia Rickard said prices for other regions were as high as $2,699 for a ‘Cremation Only Service’ and $3,599 for a ‘Bare Memorial Service’.

“The use of ‘from pricing’ appears to be common in the funeral services industry, and we are concerned such pricing may not be an accurate indication of the final price a consumer will pay,” she said.

Alex Gow Funerals also had their contracts questioned and have since made changes. The contract terms which the ACCC considered unfair included:

“Unfair contract terms also appear to be a widespread problem in the funerals services sector which we are looking closely at, together with false and misleading pricing representations,” Ms Rickard said.

The ACCC was also worried that Parkside Funerals’ contract terms allowed it to charge excessive interest for late payments and to increase the upfront price for additional services without giving the consumer prior notice or a right to terminate the contract.

“All funeral businesses should ensure their contracts are fair and reasonable, particularly given consumers may have limited experience arranging a funeral and will likely be emotionally vulnerable and under considerable pressure at the time they are doing so,” Ms Rickard said.

Saying you’re local and independent when you’re not

WT Howard Funeral Services and Coventry Funeral Homes, trading as Fitzgerald’s Funerals, each paid a penalty of $12,600 for allegedly making a false or misleading representation about their ownership.

On its website, Taree funeral provider WT Howard said that it was ‘proudly local and independently owned’ while Coventry claimed that ‘Fitzgerald’s Funerals in Townsville North Queensland is locally owned and operated’. This wasn’t the case. Both are owned by Propel, Australia’s second-largest funeral service provider.

Earlier this month the ACCC released its report into the funeral sector. It’s a valuable industry – revenue for 2020-21 is expected to be $1.6 billion. The report identified six key issues of concern.

In the report, the ACCC said it strongly encourages businesses in the sector to review their promotional materials, business processes, and training materials for staff to ensure that:

Businesses should also be mindful of the competitive effects of paying commissions in return for recommendations, and similarly, the competitive effects of any bundling or tying of products and services. The ACCC would be concerned if any such conduct was to diminish competition between providers in the industry. In certain circumstances, such conduct may raise concerns under the CCA. The ACCC has taken action against a number of businesses in the funeral services sector for different contraventions of the ACL. We will continue to enforce the law to target a range of conduct highlighted in this report.

The ACCC says it will also continue to actively monitor reports to us about potentially anti-competitive conduct in the sector and will take action where appropriate.

We encourage consumers and funeral industry participants to contact us to report any concerns about businesses’ practices.

Queensland finally committed to doing something about its farcical funeral regulations, or lack of them. Queensland funeral directors will be subject to new rules from 1 July 2022.

In South Australia, a private member’s bill was prepared, focusing on increasing professional standards and operational transparency in the funeral industry.

In New South Wales, the Independent Pricing and Regulatory Tribunal (IPART) released its second and final review of costs and pricing in the NSW Funeral Industry.

The report found that while the NSW funerals and crematoria markets are ‘workably competitive’, consumers often find the process of organising a funeral confusing and made a series of recommendations.

This year WA introduced a mandatory code of practice for prepaid funerals. Under the new rules, among other things, operators have to clearly detail the individual cost of each component in the package and any additional fees.

Changes are afoot in Victoria too. Earlier this year the Department of Justice and Community Service wrote to funeral providers to gauge interest in developing enhanced funeral pricing disclosure rules. The outcome of this consultation is yet to be made public so it’s something to watch out for in 2022.

There are more details on what these states have been working on in my recent blog Getting stuff done in ’21: the Australian states focused on funeral regulation and consumer outcomes in 2021.

Funeral directors do an important job and play an invaluable role in the community.  With more upfront information about the funeral process, better funeral pricing information on websites, and the registration and regulation of funeral directors and brokers to increase consumer confidence and industry accountability, I am hopeful that consumers will be the big winners.