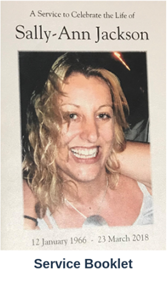 Ever organised or been to a funeral that had a photo tribute during the service and wished you could get a copy of it so you could watch it in your own space in your own time?

A Brisbane company has come up with the technology to do that and it’s pretty cool and simple to use. The same technology also provides easy access to the video recording of the funeral and the funeral’s order of proceedings.

No, this isn’t a paid advertisement. I’m blogging about this because anything that helps people mourn and access funerals during these restrictive Covid times is worth talking about. The fact it’s an Australian idea makes it even better.

It’s called KeepAR (pronounced Keeper. The ‘AR’ stands for Augmented Reality) and it’s an App for your phone or tablet.

Lynette Barlow is a Brisbane business developer and tech whiz who came up with the idea after her sister Sally died in 2018.

“I realised there was no easy way to get access to or share the photo tribute, the order of service or the actual recording of the actual funeral service,” she says.

“With KeepAR you can do all of that and share it to a mobile device with anyone anywhere in the world which is obviously really important during these Covid times.

“When my sister died, I needed the ability to sit in my car alone, or under my blankets and watch her photo tribute, listen to her favourite songs and have a good old cry because I missed her. That is one of the reasons this exists,” Lynette says.

Lynette says, “the Keepar app assists families to feel connected to a funeral service of a loved one.”

It allows the user to access funeral memories on any mobile device anywhere in the world through the free App, as long as the funeral director is using the technology.

When you open the free KeepAR app it starts scanning. You simply let your phone scan the photograph on the order of service and straight away the photo tribute starts playing on your phone or tablet.

After scanning the photo of Lynette’s sister Sally on the order of service booklet featured in this ‘how to’ video, I was able to immediately access the 7-minute photo tribute to Sally and her hour-long funeral too. There was no buffering or delays at all.

I’m pretty impressed with how it works. It was so easy to use. Open app, scan, watch, share. This video will also give you the idea:

Tradition getting in the way

The funeral industry in Australia is very traditional. I know Australians like to think of ourselves as progressive, but our society remains very conservative when to comes to death, dying and funerals. And many of our funeral directors reflect that.

For now, only the more progressive funeral homes that are using the KeepAR technology.

“It’s been quite interesting because it’s an ‘old school’ industry and some funeral directors say that this isn’t for them because their clients are older. What they seem to forget is that it’s a younger generation who are going to those funerals,” says Lynette.

“Those memories are important and funeral homes need to ensure they are available whenever families need them, wherever they are in the world,” she says.

So if you’re planning a funeral, ask your funeral director to engage KeepAR so the people mourning your loved one can access the memorial video presentation once the funeral is over. And, if the funeral has been recorded, people who couldn’t attend the funeral can watch it at their convenience on their phones or tablets.

It’s easy for the funeral home to engage the technology. They pay a one-off set up fee and then there are a few ongoing plans they can sign up to, depending on the volume of users. They simply send the file of the funeral service recording and video memorial files to the KeepAR people via Dropbox and those files are uploaded quickly (within an hour after the funeral ends). For now, those videos are then available to mourners for three years.

When you go to a funeral where KeepAR is used, you’ll see the logo on the order of proceedings so you’ll know that you can access the memorial video in your own time.

I wrote an earlier blog about beacon/Wifi technology connecting graves and urns with an App to reveal the story of the deceased.

The modUrn App provides a central place for photos, videos, voice recordings, music, documents – all sorts of things. You can read that blog here.