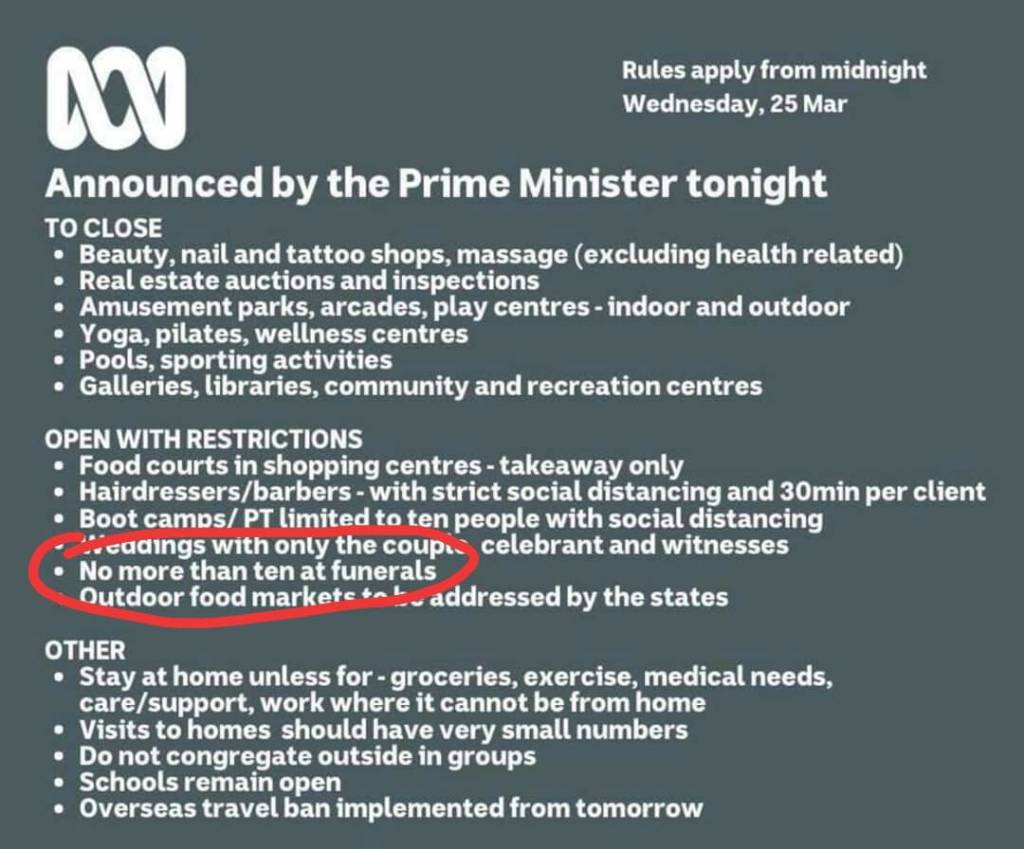 The share price of Australia’s largest funeral provider has plummeted after the Prime Minister publicly announced funeral attendance restrictions of just 10 people because of measures to minimise the transmission of Coronavirus. This figure includes the priest or celebrant, funeral directors and cemetery workers. In reality, we’re talking about six or seven mourners.

But Invocare has been quick in its attempt to communicate to the market that funerals will still going ahead, albeit from a distance.

In a statement to the ASX, Martin Earp, Invocare Chief Executive Officer InvoCare has reassured families that Invocare’s funeral homes will continue to arrange funeral and memorial services.

“We have live streaming / webcast and recording capabilities available in many locations. We want to ensure those family, friends and colleagues who are unable to attend a funeral service due to the current social distancing and quarantine requirements that they feel part of the farewell. We are focusing on the introduction of services to meet the needs of client families amidst the restrictions on social gatherings,” he said.

You’ll note the large share price jump in late February when word of the coronavirus and its predicted impacts started getting serious. This jump coincided with Invocare releasing its 2019 results which were positive (if you’re an investor).

(It’s not uncommon for the share market to react to anticipated changes in rates of death. Last year I blogged about how the predicted flu season affected profit estimates of Invocare. And, as mentioned above, the predictions proved accurate – hence the positive 2019 results.)

I spoke with Carly Dalton from Greenhaven Funerals in Victoria as she was on her way to a funeral after just finishing another service.

She told me that amid all this uncertainty, funeral directors remain committed to providing the best possible service to grieving families.

“We’re doing everything to comply with the new rules, despite not being categorised by government as an essential service.

“I’ve got a funeral on Friday and there are 30 immediate family. We are doing our best to find a solution for those mourners. We’ve moved the location to ensure we can ensure a space that caters for four metres for person and we’re seeking clarification about whether we can have the mourners in the cemetery in groups of 10, perhaps 15 minutes at the graveside per group.

“These people are bereft after losing someone and all this on top of that grief they’re having to deal with this.”

Carly says she’s thankful that funerals can still go ahead here in Australia. In countries like Italy where there are an overwhelming number of Covid 19 deaths, the deceased are being buried with no funeral.