The photo that changed it all: a funeral, a pact and an outlandish dress. 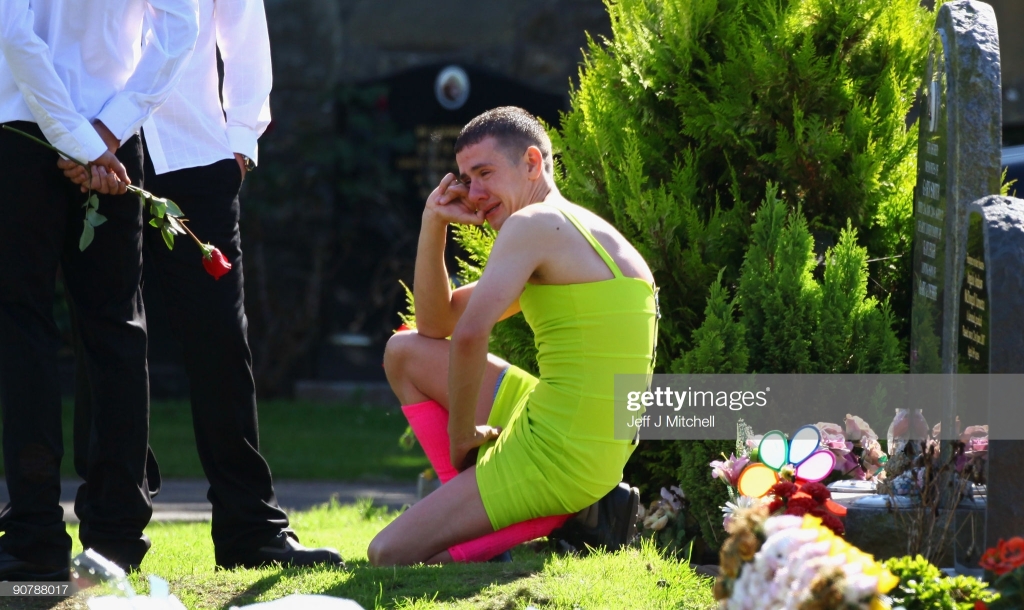 At the start of most books, there’s a dedication page. It includes the name or names of people or things who have inspired the author.

Here’s what appears on The Bottom Drawer Book: the after death action plan‘s dedication page. These names, the people and their work hold a special significance for me.

It’s been 10 years since Private Kevin Elliott was killed in a Taliban ambush in Afghanistan. He was on foot patrol when he was killed in an explosion caused by a rocket-propelled grenade in the Babaji district, Helmand province. He was 24 when he died on 31 August 2009.

I learned about Pte Elliott’s death when I saw a photograph in an online media article. The image stopped me and my tracks and I found myself staring at it for ages. I clearly remember where I was and what I was doing when I saw it. The incredible photograph by Jeff J Mitchell said so much but left me wanting to know more.

Sobbing in a Scottish cemetery was Barry Delaney, a mate of Pte Elliott. The grief in the photo is palpable and the dress is hard to miss. You see, the year before, the friends had made a pact. One would wear an outlandish dress to the funeral of the other. It was a novel but effective way those two friends approached a really tough subject. They had a conversation about their mortality, they expressed their fears, THEY TALKED ABOUT IT, and they drank vodka. And this really resonated with me (the conversation, not so much the vodka).

Inspired by the strength and friendship between these two mates, I delved deeper into the story and eventually contacted Pte Elliott’s family.

In subsequent correspondence with his grandmother, I learned Pte Elliott had also told his family what he wanted if he was killed on active service. He told them he wanted to be buried wearing the jersey of his favourite football team and white socks. His wishes were followed.

“Kev was like my brother – we would have done anything for each other,” Barry Delaney told the Daily Record newspaper.

We said that whoever died first, the other one had to wear a pink dress with green spots to the funeral – and we shook on it. It was mainly his idea and the more I think about it, I’m sure Kevin knew something was going to happen.

Barry couldn’t find a pink dress with green spots so he chose a green one and added pink socks to make the outfit look sillier.

He told the newspaper: “It’s what Kev would have wanted.”

Who was Private Kevin Elliott?

By all accounts, he was full of mischief, a bit of a lad. His commanding officer called him a “lovable rogue”.

He didn’t really want to do that tour of Afghanistan and was due to quit the army. He’d already served in Iraq and Northern Ireland, but he didn’t want to let his mates down so he agreed to do one more tour.

Captain Harry Gladstone said, “I remember talking to him shortly before we left Inverness to deploy to Afghanistan in March. He was dressed in civilian clothes, having been de-kitted, and about to walk out of Fort George back to civilian life when he decided to sign back on. “

“When asked why he signed up again he simply said, ‘I didn’t want to miss the boys’.”

But you couldn’t get annoyed with him. He was always able to get a laugh in any situation. He would bend over backwards to make sure everyone was all right. “He was hilarious, confident, loyal, and above all charming.

A story typical of Kev was on having a room inspection in Fort George, the Platoon Sergeant opened the fridge to see it full of beer. He told Kev to get rid of it; Kev proceeded to drink the contents of the fridge in front of him and continued for the rest of the night.

“Kev was kind and generous – he lived for the moment. If you asked for a fag, he threw you a packet of twenty. He was a terrible singer but my fondest memory of him was sitting in the back of a vehicle screaming out the words to ‘I got you babe’ at the top of his voice.”

Kev was a poser – he loved his body – but underneath he cared deeply about the other people in the platoon. He would try and wind people up but you couldn’t get annoyed with him, he was too nice. He wanted to be active the entire time.

He loved being in Afghanistan and had booked a holiday to Australia for our return. He also wanted a pair of white socks to walk down Dundee High Street pulling the birds! We will all miss him badly.

The photo of Barry Delaney in that lime green dress planted a seed in me that, several years later, sprouted The Bottom Drawer Book: the after death action plan. I wanted others to be like Pte Elliott and Barry Delaney. I wanted people to have that tough conversation about their mortality and funeral plans, in whatever form that may take.

Five years after Pte Elliott’s death, I sent the family my book. Written on the dedication page was “Private Kevin Elliott”. I didn’t know if it was the right thing to do so I asked the advice of the army’s bereavement officer. He gave a positive response.

I foolishly opened the card and read it on the steps of the Tamworth Post Office. It was so beautiful, I openly cried.

I didn’t really expect a reply but Pte Elliott’s grandmother, Joan T Humphreys, sent me a delightful thank you card.

An anti-war campaigner, Joan has been a vocal member of the Stop the War campaign.

While I will keep most of the contents of that card to myself, including the list of novel things that Pte Elliott wanted put in his coffin, I was so glad to know his family appreciated what I’d done.

Mrs Humphreys wrote, “Your book is delightful. Although it is a sombre subject, myself and many of my family and friends laughed many times during reading it.

“Thank you for sending the book and thank you for honouring Kevin by your dedication to him,” she wrote.

Private Kevin Elliott wasn’t the only soldier killed in that ambush on 31 August 2009. Fellow Black Watchman Sergeant Stuart Millar also died. Newly married and with a young daughter, he was 40 years old.

As you know, thousands upon thousands of people have been killed at war and their families live with their loss every single day.

Let’s not forget them. Lest we forget.