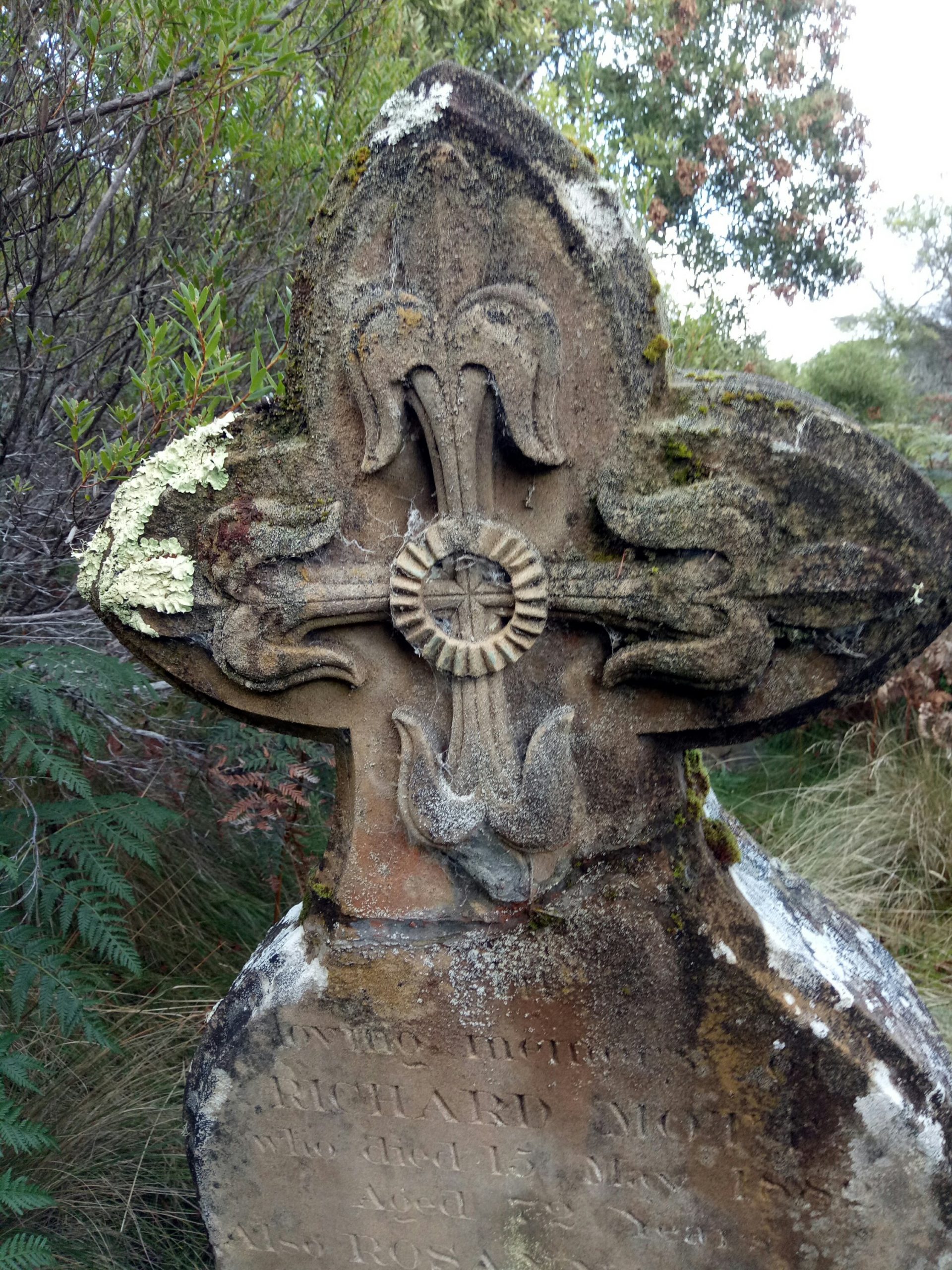 Convict 51158 lies buried in Australia’s southern-most cemetery, with an indication of his crime etched on his headstone. The 1882 grave of Richard Mott is the earliest in the remote Cockle Creek cemetery, 150km south of Hobart.

Convicted of breaking into a warehouse and committing larceny in 1844, he was sentenced to 10 years transportation. Richard had previous convictions for stealing three fletches of bacon and breaking a machine for which he had served twelve months.

On his headstone, there is a machinery cog and an emblem of the French Royal Family (the fleur-de-lis). The cog could have something to do with the broken machinery. The headstone was paid for by his French son-in-law which could be the reason behind the fleur-de-lis.

Richard was sent to Australia to serve his 10-year sentence on board the Maria Somes. The 1844 sea journey to Hobart took almost three months! There were 263 other convicts on board.

Convict records give a detailed description of Richard:

Upon arrival he spent the first eighteen months on Maria Island on Tasmania’s east coast. According to government records he committed numerous minor offences, including being “drunk” on October 15, 1852, fine 5/-.

He had been married when he left England’s shores, leaving behind a wife and six children. Even though his sentence was ten years, convicts weren’t given return passage so they were stuck in Australia after they’d served their time. Some might call that a life sentence.

The practice of remarrying was common among convicts who were unlikely ever to return to the United Kingdom, even though they were still married to another wife.  He was “certified free” on January 6, 1854, having previously made application to marry Rosanna Murphy, which was approved the year prior.  They married in St Joseph’s Church, Macquarie Street, Hobart on June 28, 1855 and had five children.

They were among the first settlers in the Cockle Creek area where Richard worked as a timber worker (a sawyer).

On 15 May 1882 Richard was found dead under mysterious circumstances. He was 74.

The following appeared in The Mercury on May 19, 1882:
“SUSPECTED MURDER.- A man named Mott died suddenly a few days ago at Recherche Bay. At first foul play was suspected, and the police went to the length of arresting a man on suspicion of murder; but by a telegram received yesterday, we learn that now  Superintendent Lambert is of opinion that death was caused by heart disease or apoplexy.
An inquest will, of course, be held.

The man arrested and then released was in fact his son-in-law.

Richard was one of the earliest burials in the Cockle Creek cemetery.  Wife Rosanna is also buried there as are two of their children – Ellen who died at age 19 years in a house fire, and Richard Jr. who lived in Catamaran with his wife Alice Doherty, and worked in a local mill.