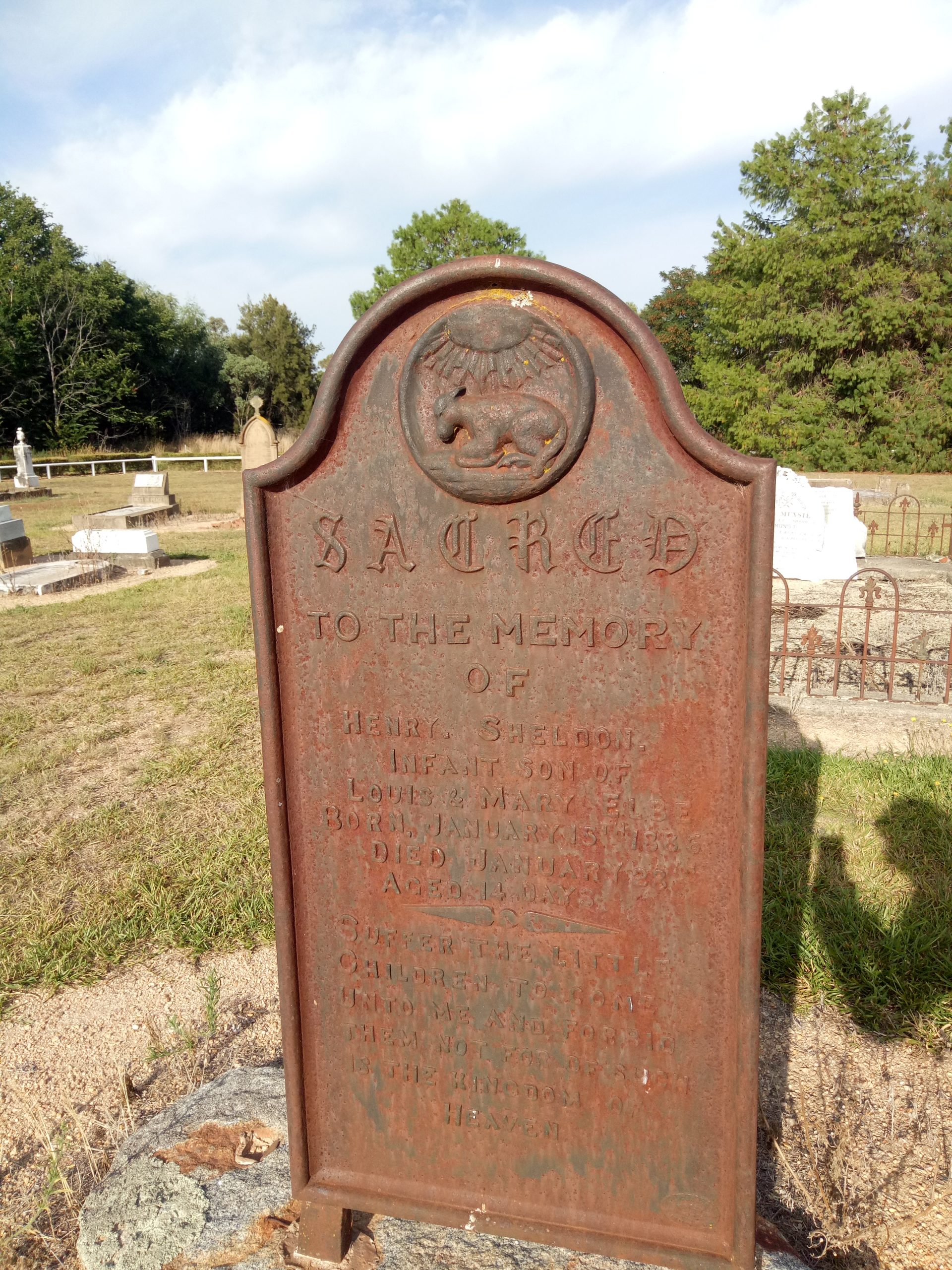 There’s a bit of a celebrity in Old Uralla Cemetery in the New England region of NSW.

Resting there is Captain Thunderbolt, Australia’s longest roaming bushranger. Fred Ward and his horse were eventually shot by a off-duty policeman in 1876, putting an end to decades of robberies.

While Thunderbolt’s grave is a reminder of Australia’s bushranging and criminal past, there’s other history on show at the cemetery.

There are at least three iron headstones in this cemetery, all on children’s graves.

While not unheard of, iron headstones aren’t often seen in pioneer cemeteries. My curiosity was sparked and my assumptions were confirmed after a quick history search of Uralla. There used to be a foundry in the small town. Not just one, two!

An iron foundry was established in the town in 1875 by Henry Goddard so it’s no surprise why there are these headstones in the cemetery. The locally poured castings would have been cheaper than the traditional stone headstones.

You’ll note there is a lamb cast in two of the three headstones. Its symbolism means innocence.

Henry Elbe died in 1886 aged 14 days. Cast in iron is on his headstone is “Suffer the little children to come unto me and forbid them not for of such is the kingdom of heaven”.

Just as uncommon as iron headstones are the footstones on display in Old Uralla Cemetery. There are several examples of them at Uralla.

Footstones are exactly what they say they are – stones that are positioned at the foot of the grave, just like head stones sit at the head of the grave.

The headstone is the primary grave marker. The footstone usually includes the initials of the person in the grave. Occasionally it will include the year of death. Some think the footstone gives makes the grave look like a bed. Like many markers in Australia’s older cemeteries, some footstones have been removed simply to make the cemetery grounds easier to maintain (One thing less to have to mow around!). That’s why I was delighted to see about half a dozen footstones in Old Uralla Cemetery. It’s something you don’t see every day.

Here’s another thing you don’t see every day in a cemetery. A typo from 1884!

The R was originally left out of Barnden. Harriet is buried beside her stockman husband George (died 1907), her son George Jnr (1909) and his wife Betsy (1916).

Note the olive wreath on Harriet’s headstone. While olive is said to symbolise peace, a wreath can represent a symbol of eternal life, with no beginning and no end. (For more cemetery symbolism read last week’s blog here.)

Like all old cemeteries, there are some graves that remind us of the harsh times of the past. This headstone tells a very sad tale of parents who lost their three children over 11 years.

Matilda Murray was pregnant with Chester when 2-year-old Arthur died in 1886. She was late in her pregnancy with Colin when Chester then died, aged 10. And then just a few months later, Colin died, aged 3 1/2 months.

Sadly these sorts of headstones are common in Australia’s pioneering cemeteries. Times were very tough in the late 1800s.

While Thunderbolt the bushranger might get top billing at the cemetery, there’s so much more to see. His grave is right beside the cemetery’s entrance so it’s tempting to visit his grave and then leave. Old Uralla Cemetery has so much more to offer and offers a real insight into the New England’s pioneering history.