Cemetery symbolism: what do the shapes, engravings, and symbols on headstones mean? 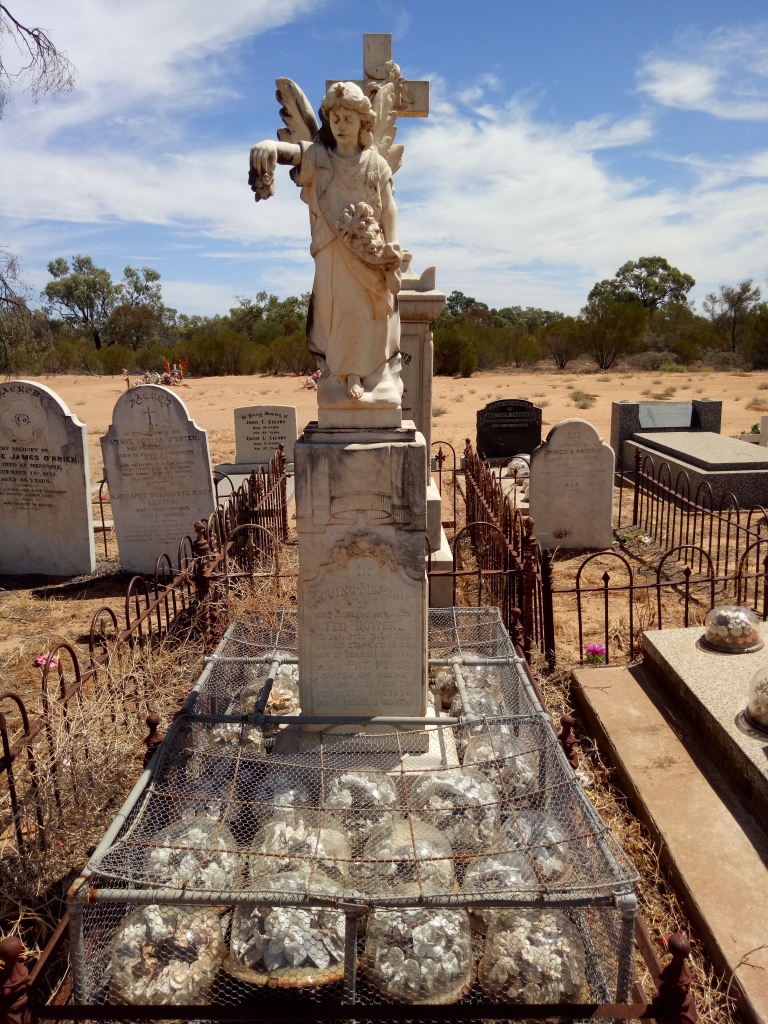 Branches, flowers, animals, urns, hands, letters, crosses and a myriad of symbols decorate graves across the world. But what are they and what do they mean?

Let’s look at some I’ve seen on my cemetery wanderings.

In Menindee, a town on the Darling River in NSW, an angel drops flowers onto the grave of young siblings Patricia and Edward (Ted) Power. The 9 and 7-years-olds were taken to the river by their mother and governess to paddle but quickly got out of their depth and encountered a quick current and 18 inches of weeds. Their bodies were found almost six hours later. They were the only children of Mr and Mrs Pierce Power of Haythorpe Station.

The angel is a symbol of spirituality and it’s said the hand pointing downward symbolises sudden death or mortality. Perhaps the flowers are blessings being spread. Angels with wings symbolise the ascent of souls into heaven.

Sadly there are eight children between the ages of 6 weeks and 10 years and 22-year-old Laura Baker memorialised on this Anglican monument. The children were the sons and daughter of George and Mary Baker. They died over a 19 year period between 1868 and 1887. Originally seen at Egyptian temples, the obelisk is a common monument all over the world. When erected in cemeteries, they signify eternal life.

Robert Foweraker died of typhoid fever aged 24 in 1896, a common cause of death among gold prospectors at the time. The broken chain symbolises the death of a family member. The finger pointing down is said to represent mortality or sudden death and is the hand of God reaching down for the soul. The pointing hand and the chain are often used separately.

The Calvary or Latin Cross is the plainest of the crosses you’ll see in a cemetery. You’ll notice there are three blocks on the base. These represent the climb Christ made to Calvary where he was crucified. The three steps are said to be a reminder of faith, hope, and charity. Some say they also represent the Father, Son and the Holy Ghost.

Celtic crosses have their arms enclosed in a circle. They were most often used by those of Irish heritage. The circle (ring or nimbus) symbolises eternity. Many believe St Patrick devised the first Celtic Cross, combining a Christian cross and the symbol of the sun which was worshiped by pagans. There are two theories behind the inclusion of the sun. One is that it was used by St Patrick to encourage pagans to Christianity. The other is that the cross envelopes the sun to show that Christ is superior to the pagan sun gods.

This cross is the symbol of the Eastern Orthodox religion. Orthodox crosses have three bars. is that They symbolise the cross Christ was crucified on.
The most popular theory about its meaning is that the top bar is the title board – the sign above Jesus’ head, the middle bar is the bar on which Christ’s hands were nailed, and the bottom, sloping bar is the footrest.

There are two obvious symbols on this headstone. The cross’ arms are of equal length in what’s called a Greek Cross. It’s connected to eastern European cultures.

In the middle of this cross is the ‘clasped hands’ symbol. This can appear in a few forms. If you look at the cuffs, you’ll note the hand on the left has a frilled blouse cuff so that represent a woman. The right cuff is a male and the male is holding the woman’s hand. It represents a marriage or relationship and the person who died holds the hand of the other. The headstone’s inscription explains the relationship between the husband and wife.

Also known as the Gothic cross, the Fleuree cross has three arms with floral or flared ends depicting three petals (the fleur-de-lis), said to resemble the French lily. The petals are said to represent the Virgin Mary and the Holy Trinity.

The Rock of Ages – Karrakatta, WA

This is based on the original drawing that accompanied a hymn called ‘Rock of Ages’ written by Anglican Reverend Augustus Toplady in 1763. A couple of variations include a woman hanging to an anchor or pillar.

Nothing in my hand I bring,
Simply to Thy cross I cling;
Naked, come to Thee for dress;
Helpless, look to Thee for grace;
Foul, I to the fountain fly;
Wash me, Saviour, or I die!

I had to look twice at the border of Daniel and Mary Ann Baker’s grave. Is this a grapevine or ivy? Grapes and vines are an obvious reference to the Catholic sacrament of the Eucharist or when wine is sipped during communion. I think this headstone however is bordered by ivy, symbolising undying affection and fidelity.

The dove and olive branch aren’t necessarily always seen together. Doves are a well-known symbol of love and peace. It also symbolises purity, resurrection and the Holy Spirit. Olive branches are representative of peace and hope. It’s said a dove carried an olive branch to Noah’s Ark as a sign of hope and to show the water level was falling.

An urn usually represents the soul or mortality. The cloth draped over it symbolises mourning.

Letters from the Greek alphabet are not uncommon on headstones. Here Iota, Eta and Sigma spell out the first three letters for ‘Jesus’. In some cases, the letters are overlaid (see earlier photo of several crosses in Wilcannia).

Shells are often used to decorate the graves of Aboriginals and Islanders. I took this photo at the cemetery in the remote Lombadina community, north of Broome. The local Bardi people are ‘salt water people’, people who have a great affinity for the sea. For thousands of years, the ocean has been a source of food and spiritual significance for the Bardi people.

One of the popular theories about sea shells on graves originates in Greek mythology where Aphrodite, the goddess of love, was born from sea foam and then was carried to shore in a sea shell. Regarded by some as a source of life, the hard shell protects a soft, living being. This can be an analogy for someone who’s died: While a human body may be devoid of life, the soul continues to live.

“Aphrodite was the Greek goddess of love and fertility her counterpart, the Roman goddess Venus. The myths say she was born from sea foam and then reached the shores of the earth in a sea shell. The shell was regarded by pagans as a source of life. Though the outside of a shell is hard and inanimate, the inside is soft and alive which can be an analogy for a human who passes away. The body’s dead shell is only a covering for the soul that is alive within.”